After brief cheers, U.S. banks are back…

MicroStrategy CEO claims to have “thousands” of…

XRP Price Analysis: Is XRP Back on Track To Its Glory Days?

XRP coin, the fourth-largest cryptocurrency by market capitalization and arguably one of the few cryptos to close the previous year 2020 on a bearish note is currently experiencing a boom that implies it is heading back towards its glory days.

XRP’s woes were heralded back in December when the United States Securities and Exchange Commission (SEC) filed a lawsuit against Ripple, the blockchain company closely associated with the XRP token. The SEC claimed Ripple and its executives CEO Brad Garlinghouse and Co-founder Chris Larsen had prior undisclosed knowledge that XRP is investment security and were involved in the sales and distribution of about $1.3 billion worth of the cryptocurrency.

The lawsuit dragged the price of XRP down by over 50% with consistent temporary fluctuations in what appears to push XRP into the abyss. This dip was further aggravated by the delisting action of major cryptocurrency exchanges. But XRP appears to be back on track with gains that have eroded the losses of the past weeks.

XRP according to Coingecko is trading at $0.3057 with a 7% gain in the past 24 hours. With the coin’s current performance, it is still a few figures away from completely clearing off the 39.5% loss it recorded in the past 30 days as it has surged 30.3% in the past seven days.

The XRP token that was recently scorned by investors is now gradually becoming the delight of many.

Many Have Bought The XRP Dip

Every legal action against a crypto project is expected to witness both an influx of new investors as well as the exodus of existing ones. Just as analysts believe that the price correction of top coins like Bitcoin can see the cryptocurrency move from weak to strong hands, the same applies to XRP also.

A scam through Twitter comments gave credence to this notion with a user @XRPcryptowolf noting that his only “regret is not buying more of the XRP dip.” A lot of other traders and investors also shares this sentiment.

Those who have stayed with XRP by buying the dip have a 30% increase in their XRP holdings at this time. While the price outlook appears bullish, a look at the technicals can help get a better perspective on the price momentum. 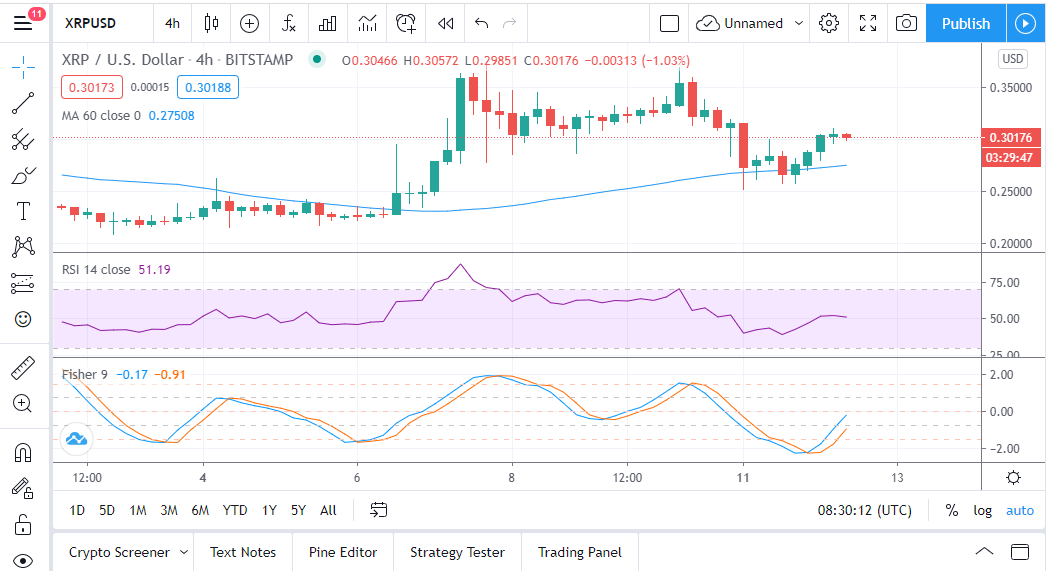 The XRPUSD price chart on TradingView is at best described as an M-shaped candle movement signaling the wavy movement of the XRP coin this year. Torn by the lawsuit from the SEC, XRP bears are consistently pushing the price from breaking past the $0.4 resistance level. However, XRP’s current RSI of 51% shows a balancing between the buyers and sellers in the market.

The Fisher Transform indicator which crossed out above the signal line on Monday, January 11th is bullish and complements the long-term moving average which is currently trending upward.

From these indicators, it is obvious that XRP is gradually picking up its momentum to match up with its peers Bitcoin (BTC), and Ethereum (ETH) and further solidify its position as the fourth-largest cryptocurrency.

Volatility Hit Again, How To Make Profit and Reduce Risks

Stablecoin Reserves May Be Held in National Banks, US Treasury Office Provides Insight

After brief cheers, U.S. banks are back...

MicroStrategy CEO claims to have “thousands” of...