62 detained in Turkey a day after…

According to the latest report from the encrypted market data provider Glassnode, institutes/investors holding a large amount of Bitcoin reduced their holdings in February, reducing their holdings by 140,000 Bitcoins, which is equivalent to a reduction of 67.2 tenths since the beginning of this month.

The “giant whale” reduced its holdings

As seen from the following second figure and the green line, since February 5, investors holding addresses with a balance of 1k-10k have sold off their Bitcoins before the price plummeted at the end of the week in order to make a profit. 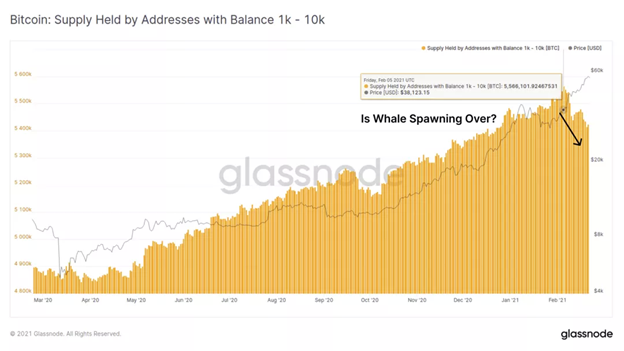 The fall in the U.S. unemployment rate

According to data from the U.S. Labor Department, the unemployment rate in the United States in January 2021 is 6.3%, a slight improvement from the previous unemployment rate of 6.7% in December 2020. In the United States, the number of people applying for unemployment benefits for the first time last week was 730,000, close to the lowest level since the outbreak of the new crown epidemic, and lower than market expectations of 825,000. The number was revised up to 861,000 last week. This news stimulated the market’s future recovery and a slight improvement in the U.S. economy. This phenomenon may serve to explain the temporary decline experienced by the cryptocurrency market.

The rise in the U.S. Treasury rate

Because of the optimistic view of the future economy, the rise in the Treasury bond rate means that the Fed will implement a tightening in policy, and investors will be more inclined to invest funds in the bond market to obtain stable and high returns. This has caused violent fluctuations in the stock market and the crypto market.

From the four-hour candlesticks of BTC, Bitcoin has continued to plummet since February 21. At the time of writing, the price of BTC has fallen by approximately 24.52%. Despite a short-term rise on February 24 and February 25, which pulled the Bitcoin price up to the $50,000 level, the upper-pressure level of about $51,000 is being suppressed strongly. BTC/USD has been tested many times, and it has not succeeded in breaking the $51,000 level, indicating that the resistance above $51,000 is relatively large. If the bulls do not have a strong upside, it is impossible to stand firm. The recent 4-hour candlesticks have fallen below the support level of the previously drawn-up ascending channel and the power of bulls failed to surpass the power of bears. In the short term, the BTC price will likely correct to around $40,000.

From a technical point of view, the Bollinger Band is slowly shrinking. On Feb 25, the blue MACD line briefly surpassed the yellow signal line below the zero axes. This was a normal trend that there would be a short-term rebound after the currency price plummeted. Then the MACD line(blue) crossed the signal line(yellow) from top to bottom, formed a death cross with a constantly increasing opening amplitude. This helps confirm the formation of a short-term bearish market.

Data shows miners are “accumulating” as Bitcoin falls to $44,000

3 Reasons Behind Bitcoin and the Crypto Market’s Sudden Crash

Ethereum Devs Launch Spadina Testnet, What Needs to be Perfected for ETH 2.0?