Chainalysis Valued at Over $1 Billion after…

The Bank for International Settlements (BIS) has released its newest quarterly report on the changes in the payment industry, including the market impact of the recent coronavirus outbreak.

Some of the trends mentioned in the report include stablecoins, tokenized securities, central bank digital currencies (CBDCs), cross-border payments, and peer-to-peer payments.

The pace of change and innovations’ potential for disruption in the payments industry was one of the key takeaways of the report. In turn, this has propelled payment systems to the top of policymakers’ agenda, according to the BIS.

Bitcoin and Libra have also caught the institution’s attention, while the BIS acknowledged that central banks are increasingly exploring the “desirability and feasibility of establishing their own peer-to-peer systems through digital currencies.

Some of the key areas CBDCs that the report covered is that CBDCs should be secure, accessible, and offer retail convenience while protecting users’ privacy.

The results based on the study by Auer, Cornelli, and Frost (2020) found that the results of the CBDC projects are mixed; some projects have determined the costs for creating a CBDC exceed the benefits.

The report mentioned Project Inthanon-LionRock, a CBDC study by the Bank of Thailand and the Hong Kong Monetary Authority in 2020, where a proof of concept was completed for wholesale payments. One of the key findings from the study concluded that due to the highly efficient and trusted retail and wholesale payment infrastructures in Hong Kong, there is not an urgent need for a CBDC at both the retail and wholesale levels. Although there is little value in developing a CBDC for retail payments, the study found that there has been an increase of interest in cross-border payments in funding solutions. The two authorities hope the study will help both jurisdictions in terms of trade.

Previously reported by Blockchain.News, Sweden is currently one of the least cash-dependent countries in the world, with banknotes only taking up 1 percent of the Swedish GDP, according to Riksbank’s data. The data also showed compared the Swedish’s cash GDP against 11 percent in Europe, 8 percent in the United States, and 4 percent in the UK.

The BIS also designed the CBDC pyramid, addressing the needs of the consumer if a CBDC is offered. 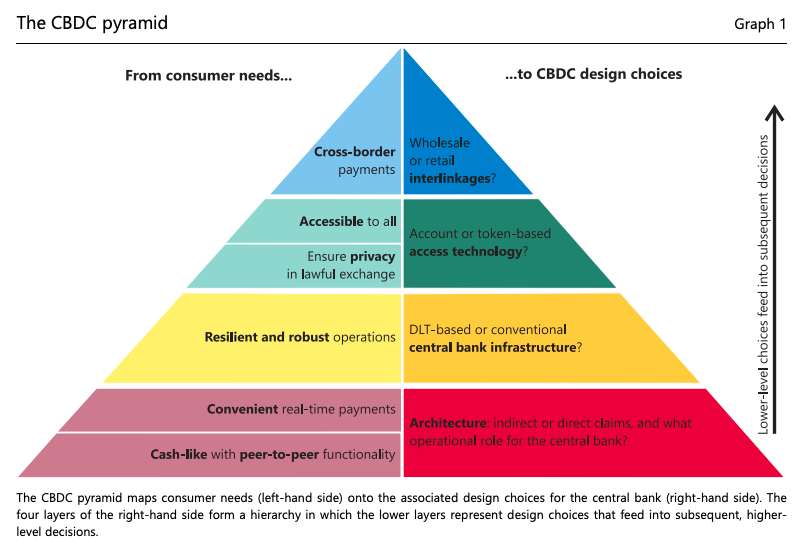 Although bankers have been in dispute over DLT and CBDC, BIS researchers say that existing trials have “not always been encouraging,” although central banks such as the People’s Bank of China have been pushing forward with CBDC trials.

Tokenization: The future of securities settlement

The BIS mentioned that currently, traders are used to the inefficiencies of the settlement systems, although these inefficiencies are regarded as limitations. Blockchain could be used to disrupt the systems to remove the need for intermediaries, and the resulting efficiencies could be a game-changer for markets.

However, there is a catch – “Market participants might not want to move to shorter settlement cycles, as this could increase liquidity requirements and give market-makers less time to source the cash or securities needed for settlement,” the report said.

These issues, along with legal requirements must be dealt with before the BIS decides that a distributed ledger-based technology would be suitable for a new securities system.

Chainalysis Valued at Over $1 Billion after...